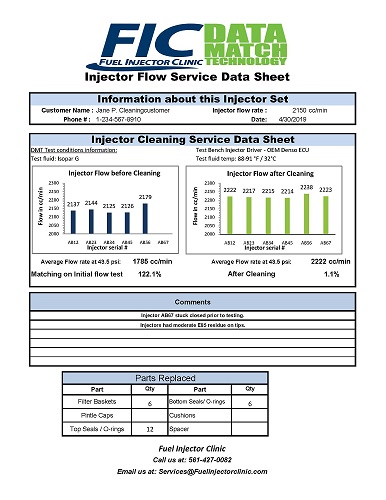 Base Fuel Pressure (also: Base Pressure): The pressure to which a fuel system is regulated during start and idle condition. When using a 1:1 rising rate fuel pressure regulator, the Base Pressure is the differential that the injector ‘sees’ regardless of boost level and is therefore the constant operational pressure of the injector.

CC/Min (cubic centimeters per minute): The Metric unit of measurement used to describe the flow rate of injectors. It is important to note that this value depends on what fluid pressure is used. (See ‘Bernoulli’s Principle and Fuel Injectors’)

Diffuser Plate: These plates are visible on to the bottom of many modern injectors. The plates contain any number of holes of differing sizes and orientations. Diffuser plates are often welded onto the bottom of injectors and can be used for restricting flow and/or changing the spray pattern.

Duty Cycle (also: Injector Duty Cycle or IDC): The time that a fuel injector spends open compared to the total time available (two rotations of a four stroke engine), typically expressed in a percentage.  Duty cycle is RPM dependant since the faster an engine spins, the less time an injector will have available to open before the next ignition event.

Ferrous (Metals): A term used to denote the presence of iron (Fe) in a metal alloy. In order for an electromagnet within a fuel injector to move the internal valve mechanism, it must act upon a ferrous piece within the injector. It is these ferrous pieces which are susceptible to corrosion.

Hygroscopic: the ability of a substance to attract and hold water in suspension

Lb/hr (pounds per hour): The Imperial/American or ‘SAE’ unit of measurement used to describe the flow rate of injectors. It is important to note that this value depends on what fluid pressure is used. (See ‘Bernoulli’s Principle and Fuel Injectors’)

Multi Port Injection (MPI): Fuel injection system that utilizes individual an injector for each cylinder. These injectors are typically installed in the intake manifold near the cylinder head or in the cylinder head itself, and aimed to spray fuel at the intake valve(s). These injectors can be fired sequentially (each injector is timed to fire just prior to opening of the corresponding intake valve), in batches (groups of injectors fired together), or simultaneously (all injectors are fired at the same time). This type of injection allows the precise and even dispensation of fuel to all cylinders.

Pickling (your fuel system): Pickling is a slang term used to describe the process of preserving your fuel system components by running some type of preservative fluid (regular gasoline in most cases) through the system. This is done in order to displace liquids that can hold water such as alcohol based fuels (including E85).

Pulse: One fueling operation for a single injector which typically coincides with the intake stroke of its matching cylinder in a MPI setup.

Saturated: This signal is used to operate high impedance injectors. Rather than a complicated injector driver signal requiring a mid-pulse reduction, a saturated signal is a simple constant strength signal.